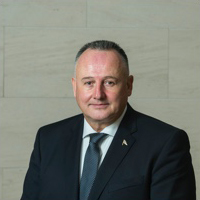 Croatia is known throughout the world for its natural beauty and cultural assets. In the world of sports, it is especially recognized and appreciated as a small, but proud sporting force. Our sporting achievements are based on a long tradition in which the city of Split holds a special place. It is a city that, with its individuals, clubs, and teams, has written countless outstanding results on the biggest stages over the past hundred years. Athletes from this city have made Croatia and the city of Split famous all over the world.

It is unlikely that the water polo family of our continent could have chosen a better place than Split to host this year’s European Championships, which we sincerely hope will mark the end of a global plague, a pandemic that has tortured us for more than two years. Split is a magical place where islands line up like pearls in blue. Moreover, the city is surrounded by the Adriatic Sea from the south, and protected by the mountain Mosor from the north. Is it any wonder that the Roman emperor Diocletian decided to build a magnificent summer residence here, around which the palace and today’s city of Split developed over time?

Split is a combination of natural beauty and millennial culture, a city of song and sun enjoyment, but there is something you probably do not know. This is “the sportiest city in the world”. This is how the city is praised by all its residents, but this is not an exaggeration, it is a fact. Split has 258 Olympians who have participated 369 times in the Olympic Games, in 17 sports. The city with only 161 000 residents even has 80 Olympic medalists, and some of them are multiple! So many Olympic medals, along with those from World and European Championships, for such a small population is hard to find anywhere else. On average, there is one Olympic medal for every 2 012 residents of Split! Twenty-nine of them are water polo players. More than two teams!

This is a city whose two water polo players were inducted into the International Swimming Hall of Fame in Fort Lauderdale, a city with three major water polo clubs (Jadran, POŠK, and Mornar) with a total of three European Championship titles or six major Euro Cups. After all, Croatian water polo originated in this city in 1908, and with the 2022 European Championship, this city will be the 5th city in Europe to host this event more than once, exactly 41 years after 1981.

I could go on talking about sports for a long time, especially about water polo in Split. And I will, but only when you come to visit us this Summer.

And therefore, in the end, I can only say to you – dear friends, water polo fans, dear water polo Europe welcome to the sportiest city in the world!