Advance to the East
The tournament in the Bulgarian capital lasted from 4 to 11 August. Sofia went down in history as the easternmost city ever to host the European Championships. A little later, it will be slightly surpassed by Athens. Before bidding to host this European Championship, Sofia had 7 swimming pools, but then built an additional, magnificent swimming pool complex.

A women’s tournament for the first time
The 1985 European Championships went down in history as the first water polo championships for women. Although they were part of the same championship, the women did not compete in Sofia but on the other side of Europe, in the Norwegian capital, Oslo. In the women’s competition, the Dutch won the first gold medal, silver went to Hungary, and bronze to West Germany. In the men’s competition, the best USSR was followed by Yugoslavia and West Germany.

The first prefabricated pool
This European Championship was the first time a prefabricated pool was used. The 50-metre-long aluminium pool was used only for swimming training, and was built in Italy for the French city of Perpignan, which temporarily ceded it to Strasbourg to help out. The men’s tournament was held in the swimming pool in the centre of the city, not far from the current European Parliament building, while the women played in a small town north of Strasbourg, Wacken.

Soviet domination
For the first time since pre-World War 2 Hungary, and the 1950s and early 1960s, one national team managed to win three consecutive gold medals. The 1980s was the era of the then Soviet Union at the European Championships. The silver medal again went to Yugoslavia, and the bronze to Italy. The top scorer of the tournament was the German Hagen Stamm with 21 goals. 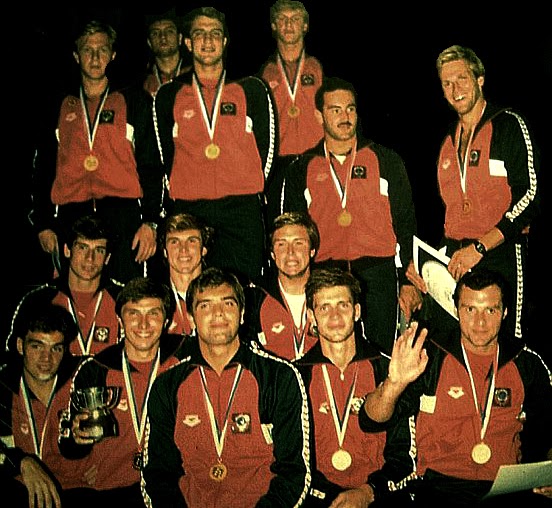