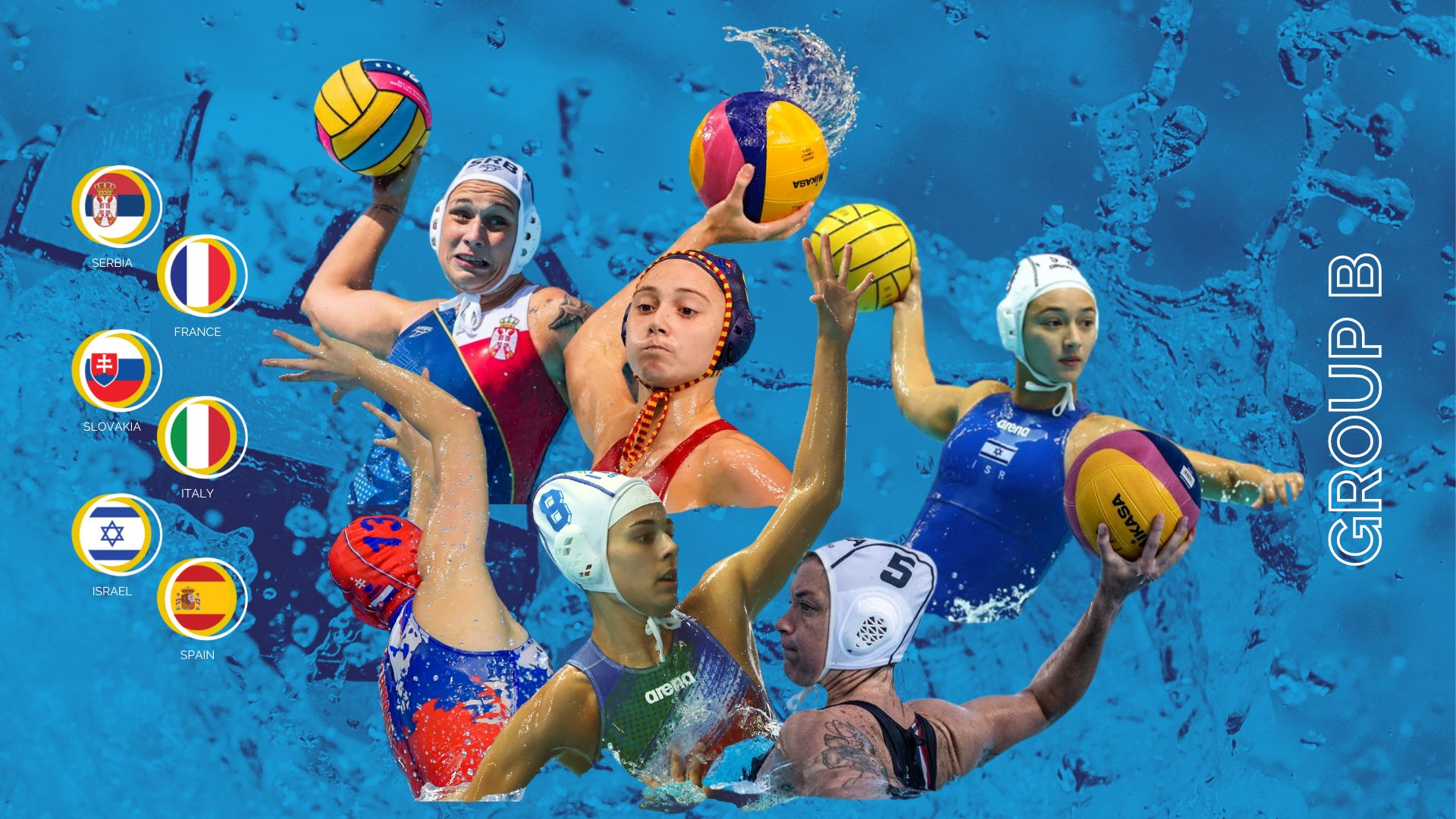 Meet the women’s teams – group B

The Israeli women’s water polo team is participating in the European Championships for the third time in history. At least in the last 5-6 years, great efforts have been invested in the development of water polo in Israel, which is especially evident in women’s water polo. Clubs are getting stronger, foreign experts are being brought in as coaches, and various competitions are being organised. Recently, the U19 European Women’s Championship was held in Netanya, and Tel Aviv will host the next European Senior Championship after Split.

In Budapest 2020, Israel achieved its first victory in a European Championship. Two, to be exact. They beat Germany (10:3) in the group and then Croatia (11:7) in the match for 9th place. In their first European tournament, in Barcelona 2018, they drew twice – in the group against Croatia and again against Serbia (4:4) in the match for 9th place, which they later lost on penalties.

Another big, strong women’s national team from the European top. The fact that Italy is the only team besides the Netherlands whose women’s water polo team have been European champions 5 times speaks volumes! They had a great run of 6 consecutive European Championship finals, winning 4 of them – 1995, 1997, 1999, and 2003, and in Eindhoven 2012 they won their fifth European Championship gold.

Italy was also very successful at the Olympic Games, where they went the furthest in Athens 2004, winning gold. In Rio de Janeiro in 2016, they took silver.

The history of women’s water polo in Serbia is very different from that of men. While the men’s team from this country is a world power, the women are without significant success and are almost at the beginning. But Serbia is not exactly unknown when it comes to appearances in the women’s tournament of the European Water Polo Championship.

Players from this country first appeared at the European Championship in 1997 (under the name FR Yugoslavia), then in 2006, 2016, 2018, and 2020 under the name Serbia, and now they are expected in Split. Serbia qualified for the Spaladium Arena tournament by finishing second in their qualifying group, played in February in Zrenjanin. Serbia were only weaker than Greece (8:24) and convincingly defeated the teams of Switzerland (17:11), Turkey (22:4), and Belgium (19:7).

At the 2016 championships in Belgrade and 2018 in Barcelona, Serbia came close to reaching the quarter-finals, but both times the Serbian women lost narrowly to Germany, 14:13 and 9:8. At the last European Championships in Budapest, they finished 12th or last after 6 losses in as many matches.

For the second time in a row, Slovakia is also taking part in the European Women’s Championship. The first time was two and a half years ago in Budapest, in January 2020. They qualified for the tournament in Split based on the highest score achieved by the third-placed teams in the qualifiers. In the qualifiers in Zrenjanin, the Slovakian women finished third with 6 points (behind Greece and Serbia), the same as Switzerland in the second tournament, but Slovakia had the better goal difference. This is important because Russia’s elimination from the competition meant that the best third-placed national team from the qualifying tournaments was selected.

In their only European Championship so far, in Hungary 2020, Slovakia made it to the quarter-finals after outscoring Serbia (6-2) and Croatia (9-7) in their group. Later they came up against too strong a “wall” of opponents such as the Netherlands, Italy, and France. But in any case, they did not disappoint. Maybe they can repeat this result in Split.

The silver medalists of the Tokyo Olympics, but also the defending champions of the 2020 European Championships in Budapest, the Spanish women’s water polo team, will certainly be among the candidates for the medal in Split.

The Spanish women’s national team took part in the European Championships for the first time in 1993 in the English city of Leeds and finished 9th, as they did in Vienna in 1995, while in 1997 they reached the semi-finals for the first time in front of their crowd in Seville. However, still without a medal. The first medal was won again in front of their home crowd in Andalusia, but now in Malaga 2008, where Spain won silver. After failing to reach the semi-finals in the next two European Championships, they became European champions for the first time in Budapest in 2014. They won the third medal, bronze, again in their pool. In Barcelona 2018, they won bronze after beating Hungary. Looking back at their medals at the European Championships, it is noticeable that they have won three medals in the last 8 years, two of them gold, and that they have been on one of the steps of the podium at the last two European tournaments. Confirmation of the Budapest 2020 success came a year later in Tokyo with Olympic silver. It is not the only Olympic silver for the Spanish women, however, as they achieved the same at the London 2012 Games.

Spain is also the last national team to manage to beat the “invincible” Americans in the elimination round of a major tournament. That was in the quarter-finals of the World Championship in Barcelona in 2013, which they went on to win. After Barcelona in 2013, they played in the finals of the World Championships twice more, in Budapest in 2017 and Gwangju in 2019. Both times they were defeated by the Americans.

This year Spain have already won one medal, silver at the World League in February. They also have silver in this competition from 2016, while they won bronze in the FINA Cup in 2014.

The history of French women’s water polo is quite interesting. At the very beginning of women’s tournaments, France not only competed but also won medals – bronze in 1987 and 1989. A decade later, they are still near the top, but with a slight decline. For example, the French women finished fourth in Athens in 1991, followed by two fifth places and three consecutive 8th places. At the beginning of the 21st century, they failed to qualify for the European Championships three times (2003, 2006, and 2012), while finishing 7th or 8th in other tournaments.

They qualified for the European Championships in Split via qualifiers in Gzira, Malta, where they lost to Israel (10-13) but defeated Portugal (12-7) and Malta (23-4).

France have participated in the World Championships seven times, but have never finished higher than 7th. 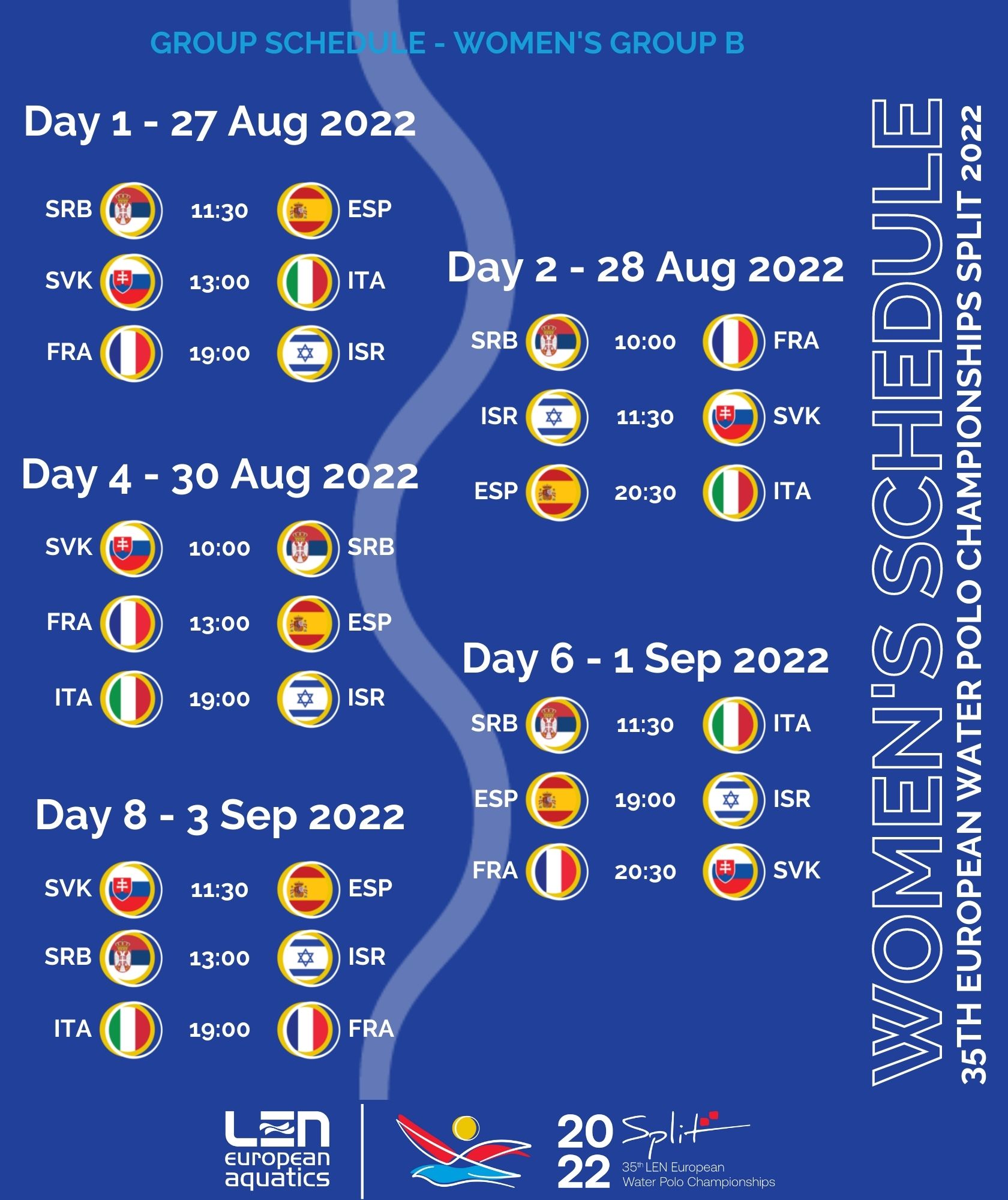