Round robin
Paris, once again an Olympic city, hosted the 3rd European Championships which was held on more days than there were teams. In fact, the matches took place from 23 to 30 August 1931, i.e. for 8 days, and there were 7 national teams. It was played on the principle of a round robin or ‘everyone against everyone’. France, Hungary, Germany, Belgium, Czechoslovakia, Austria and Sweden took part in the European Championships.

Gave up the game and remained without a medal
One of the most bizarre cases in the history of the European Championships in water polo occurred at this championship. Austria and Belgium were supposed to compete against each other in the 3rd round, but the match did not take place because more than half of the Belgian players had to return home for two days for professional reasons. There were only 3 players left in Paris. Austria therefore won the match without a fight, 1:0 according to the rules of the time, but thanks to this victory, Austria ended up with 6 points or one point more than Belgium, and won the bronze medal!

Untouchable Hungary
Hungary won their third European title in a row with 5 wins and 1 draw (2:2 against Germany) or 11 points. Germany came second with 10 points, and Austria third with 6 points. Hungary was led to its third gold by the great coach Bela Komjadi, who would die only two years later (1933) at the age of 41. The legendary swimming pool on the Danube in Budapest is named after Komjadi.

First competition with groups
In Germany, groups were formed for the first time in 1934, and the competition began with them. A total of 10 national teams, divided into 2 groups of 5 national teams each, took part in the championship. The top two teams in each group moved on to the final group, where they competed against each other. The third and fourth placed teams in the groups played for places 5 to 8, while the last placed teams in groups A and B played for 9th place.

8 goals in 7 matches
The Hungarians showed all their superiority. In a total of 7 games in the entire European Championship, they conceded only 8 goals. They scored 57! In the first four European Championships, Hungary did not lose a single match. Gold clearly went to Hungary, silver to Germany, and bronze to Belgium.

83-metre swimming pool!
For the 1934 European Championships, the Germans built an 83-metre swimming pool in Magdeburg! However, they blocked it with a pontoon so that you could swim in one part of the pool and play water polo in the other at the same time. And all this at the new stadium that had room for 10,000 spectators. The championship was held from 12 to 18 August. 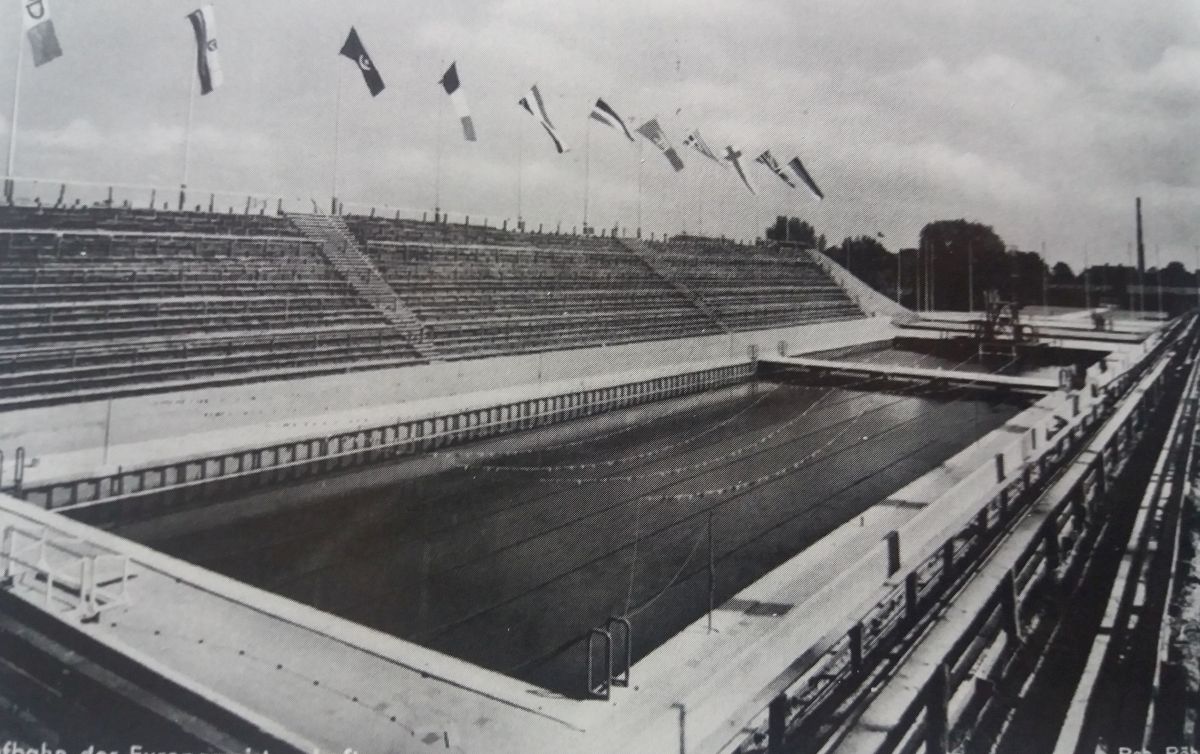 Pool in Magdeburgu where the LEN European Championships was held in 1934.